This tapestry showcases the historic schoolhouse, now a center of community life.  The origins of the Cultural Center and the Sierra Storytelling festival are depicted.  Also shown are dances, performances, art shows and children’s Art Camp.  In the lower right hand corner, Gary Snyder reads his complete work, “Mountains and Rivers Without End.”

Below: Detail of the above in three sections 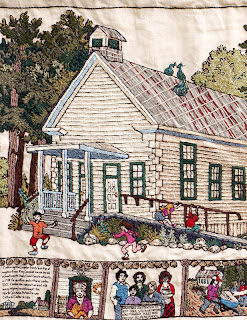 Left: Explains that the Cultural Center building belongs to the Coughlan family. Mary Campbell, the matriarch of the family during the 1980's, after the schoolhouse ceased being used as a school, wanted the old building to be used as a community center. She leased the old schoolhouse to the Shady Creek Construction Company, who incorporated it as the North Columbia Schoolhouse Cultural Center, a non-profit organization.

Right:Within a year of the incorporation, the amphitheater was built by volunteer labor. Here, Holly Tornheim wheels cement for the bench posts, and Kurt Lorenz drills post holes. To this day, the amphitheater is used for many events, including the renowned Sierra Storytelling Festival. 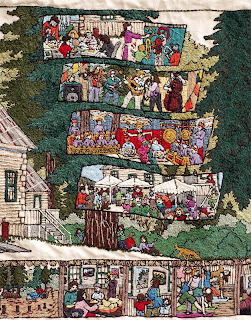 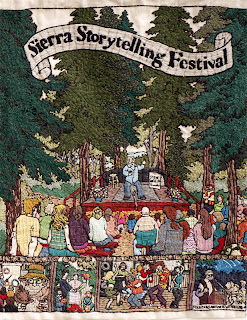 Storytelling with storyteller and audience